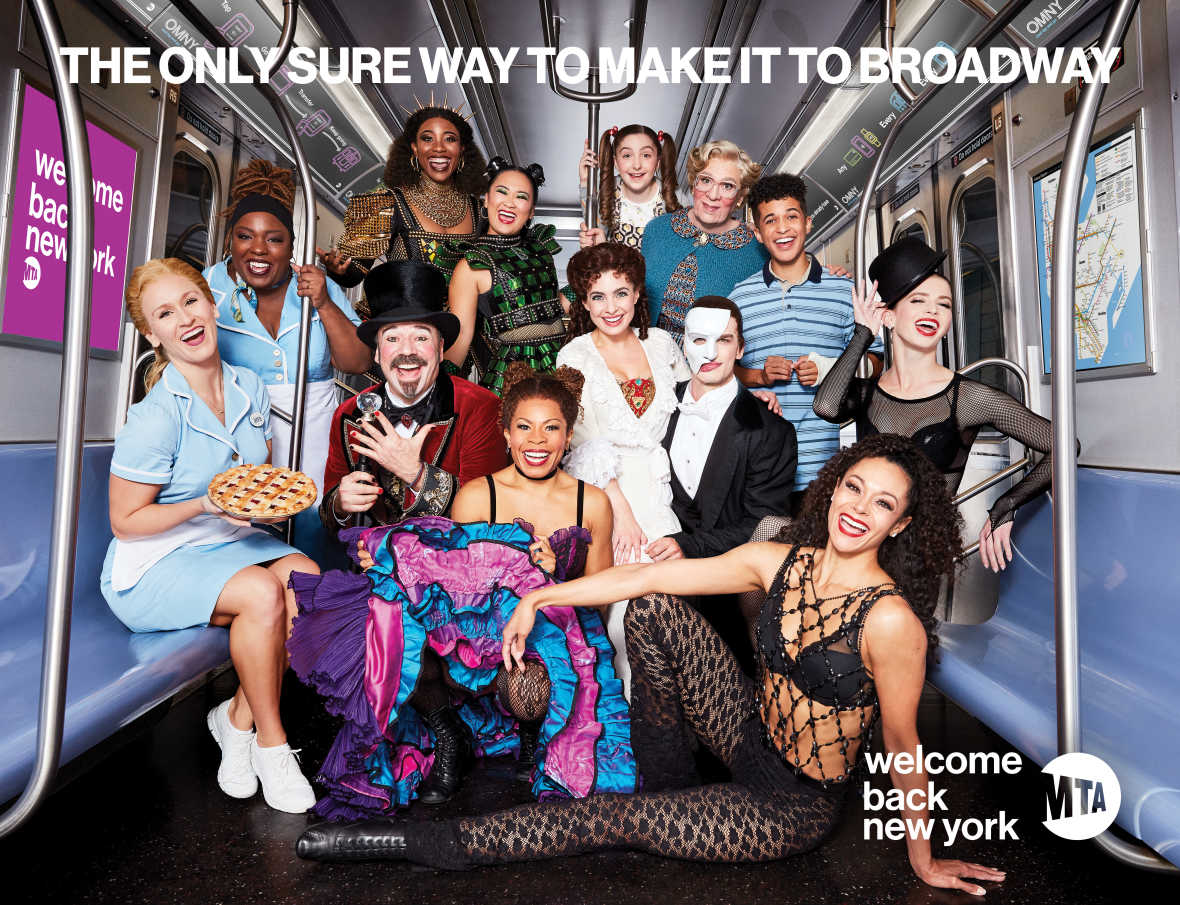 Join the MTA in welcoming back Broadway with don't-miss deals and a fantastic line-up of shows to enjoy including CHICAGO, Dear Evan Hansen, Moulin Rouge! The Musical, Mrs. Doubtfire, The Phantom of the Opera, SIX and Waitress!

Come paint the town at CHICAGO, now celebrating its 25th anniversary on Broadway! CHICAGO has everything that makes Broadway great: a universal tale of fame, fortune and all that jazz, one show-stopping song after another, and the most astonishing dancing you’ve ever seen. No wonder CHICAGO has been honored with 6 Tony Awards®, 2 Olivier Awards, a Grammy® and thousands of standing ovations. CHICAGO tells the story of two rival vaudeville performers caught up in the Roaring Twenties' world of booze and jazz. Show-stopping numbers like "Cell Block Tango" and "Razzle Dazzle" scrutinize the 1920s justice system while at the same time wowing the audience with panache. With nightclub-style musical numbers, scenes of saucy rendezvous and sultry dancing, CHICAGO reveals the underbelly of vaudeville politics and, ultimately, the price of fame.

Come on, babe! Save $25 on tickets to CHICAGO! Three ways to purchase tickets:

The winner of the Grammy Award®, the Olivier Award, and six Tony Awards® including Best Musical, DEAR EVAN HANSEN is the deeply personal and profoundly contemporary musical about life and the way we live it. DEAR EVAN HANSEN has struck a remarkable chord with audiences and critics everywhere. The Washington Post calls it “Theatrical magic. One of the most remarkable shows in musical theater history.”  And NBC Nightly News declares the musical “an anthem resonating on Broadway and beyond.” DEAR EVAN HANSEN features a book by Tony Award® winner Steven Levenson, a score by Grammy, Tony, Olivier and Academy Award® winners Benj Pasek and Justin Paul (La La Land, The Greatest Showman), and direction by four-time Tony Award nominee Michael Greif (Rent, Next to Normal).

Pop the champagne, Moulin Rouge! The Musical is the winner of 10 Tony Awards® — including Best Musical!

Enter a world of splendor and romance, of eye-popping excess, of glitz, grandeur, and glory! A world where Bohemians and aristocrats rub elbows and revel in electrifying enchantment.

Welcome to Moulin Rouge! The Musical!

After losing custody of his kids in a messy divorce, Daniel Hillard creates the kindly alter ego of Scottish nanny Euphegenia Doubtfire in a desperate attempt to stay in their lives. A hilarious and heartfelt story about holding onto your loved ones against all odds, Mrs. Doubtfire is the musical comedy we need right now — one that proves we’re better together.

Comedy is back on Broadway! Come see Mrs. Doubtfire for as low as $49! Three ways to purchase tickets:

The Phantom of the Opera

The most record-breaking show in Broadway history, Andrew Lloyd Webber’s The Phantom of the Opera debuted in 1988, winning seven Tony Awards® including Best Musical.

Based on Gaston Leroux’s horror novel, it tells the enticing story of The Phantom, who haunts the stage of the Paris Opera and subsequently falls in love with a beautiful young soprano. Audiences are in for a thrilling night of spectacle and romance, accompanied by an unforgettable musical score.

From Tudor Queens to Pop Princesses, the SIX wives of Henry VIII take the mic to remix five hundred years of historical heartbreak into an exuberant celebration of 21st century girl power! This new original musical is the global sensation that everyone is losing their head over. The New York Times says SIX “TOTALLY RULES!” (Critic's Pick) and The Washington Post hails SIX as “Exactly the kind of energizing, inspirational illumination this town aches for! The Broadway season got supercharged!”

Featuring music and lyrics by Grammy Award® winner Sara Bareilles (“Love Song,” “Brave”), Waitress the musical has returned to Broadway. Meet Jenna, a waitress and expert pie-maker who dreams of a way out of her small town and rocky marriage. Pouring her heart into her pies, she crafts desserts that mirror her topsy-turvy life, such as “The Key (Lime) to Happiness Pie” and “Betrayed by My Eggs Pie.” When a baking contest in a nearby county — and a satisfying run-in with someone new — show Jenna a chance at a fresh start, she must find the courage to seize it. Change is on the menu, as long as Jenna can write her own perfectly personal recipe for happiness.

Save up to $60 on select seats through December 23 only! Three ways to purchase tickets:

All shows within walking distance from Times Square - 42 Street

GCT is also within walking distance of all shows!