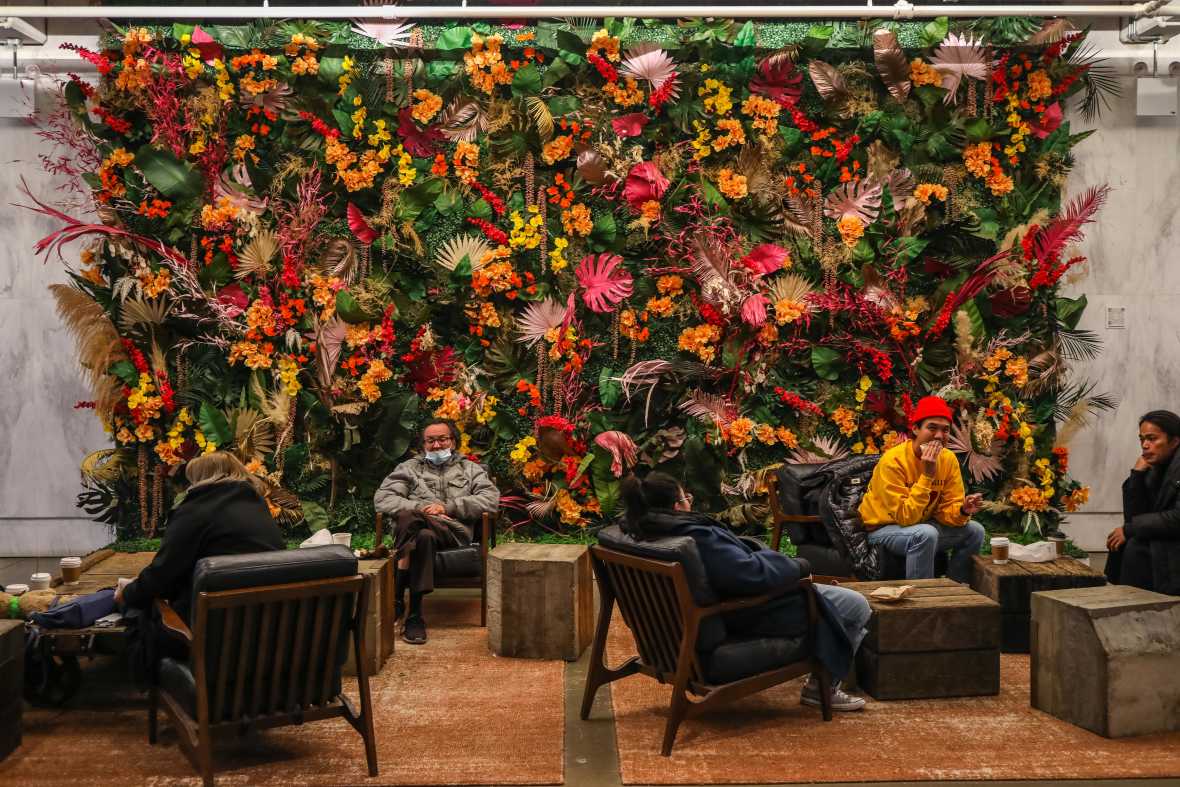 In one form or another, Industry City (née Bush Terminal) has been a major presence in Sunset Park stretching back to the late 1800s, when the first warehouses were built by the water. During World War I, the US Navy took over the area and the Brooklyn shipping and storage facility served as America's primary ammunition, food, and clothing depot.

In 1956, what may be the largest explosion in NYC history rocked the terminal: A blast at the Luckenbach Steamship Company pier "launched steel beams half a mile, rattled buildings in Lower Manhattan and could be heard 35 miles away," according to the New York Times. By the 1970s and 1980s, much of the complex was abandoned, but in recent years the area has taken on a new life.

The Industry City of today features eight massive buildings, between 33rd and 37th Streets and 2nd and 3rd Avenues, that now provide office, studio, and light manufacturing space for more than 550 companies. Within the last decade, it has become a shopping, eating, and entertainment destination both for the immediate community and the city at large.

The area is stacked with appealing restaurants, bars, retail stores, comfortable indoor public spaces, and decked-out courtyards between buildings. It's a pleasant and welcoming place to hang out, with countless nooks and surprises as you may make your way through the campus. And it's especially fun here right now, during the holiday season, with outdoor fire pits they blaze up in each courtyard offering a cozy setting all winter long.

Here are some highlights to help guide you through the complex.

The place to start is Japan Village, which fronts Third Avenue and is home to an astonishing  array of eating options, including ramen at Setagaya, curry katso over rice at Moriya; takoyaki, or octopus balls, at Hachi; and some of the best onigiri in town at Obentoyasan, the seaweed-wrapped rice served warm and stuffed with things like spicy tuna or salt plum. There's also a huge Sunrise Mart, the Japanese specialty foods market with groceries, produce, a high-end butcher, beverages, salty snacks and chips, and a fishmonger with top notch pre-packaged sushi.

An sprawling Sahadi's opened at Industry City in the fall of 2019, in Building 4, making it the beloved Mediterranean grocer's second location after holding it down on Atlantic Avenue in Brooklyn Heights for more than 70 years. In addition to everything you love about the original Sahadi's — the bulk nuts and dried fruit, the coffee, the cheeses and olives, the prepared food at the deli — the Sunset Park outpost has a cafe with a menu of meze and kabobs, a full bar, and lots of seating both inside and out under a heated tent.

You'll also find outdoor seating for the Frying Pan, the Brooklyn outpost of the floating Frying Pan in Manhattan, where you can order up seafood fare and pub faves (which you can also enjoy in the intimate Helm Bar).

More Middle Eastern fare can be had at Ayat, Abdul Elenani and Ayat Masoud's acclaimed Bay Ridge Palestinian restaurant that opened its second location across 36th Street in 2022. (Elani also runs, with Akram Nassir, the equally great Al Badawi in Brooklyn Heights.) Not technically a part of Industry City, true, but well worth checking out while you're here for their spreads, salads, and massive shareable platters.

Three meaty spots vie for your attention, led by Billy Durney’s renowned Hometown Barbecue, whose Industry City menu features Korean sticky ribs, an incredible pastrami sandwich, and some of the best tacos you'll ever eat, including one filled with brisket and another carrying Oaxacan chicken. There's also a Burger Joint in the main food hall in Building 2, which after all these years still serves one of the most satisfying straight-up burgers in the city. And whole-animal butcher Ends Meat makes about a dozen different sandwiches.

There are lots of plant-based options as well, such as the excellent, vegan sandwiches from Vinnie Bolognese and Fred Panah, the rock-n-roll duo behind Renegades of Sunset who met while working at ABCV and make all of the "meatz, cheezes, and sauces" in-house here in the food hall. Right nearby is Taza Mkt, which specializes in Indian home cooking and features several appealing vegetable dishes, and at Avocaderia the namesake produce is used in all sorts of sandwiches and salads.

Many of the above places also sell some sort of alcoholic beverages, but there are a bunch of bars and even on-site distilleries as well. The Big Alice Barrel Room in Building 6, along what they call "Innovation Alley," always has 14 different beers on tap. Brooklyn Kura brews sake right there behind the bar. In addition to pouring what they call the city's largest selection of NY State made whiskey, gin, and vodka, Barrow's Intense Ginger Liqueur also serves "a vegan, Kosher, and gluten-free liqueur created with 200 pounds of fresh ginger per batch." Which does indeed sound intense!

Sure, the Industry City ice rink is kind of dinky (it's so small it gets Zamboni-ed by hand), but the kids always seem to be having fun, and it's certainly a handy adventure for local families looking for something to do on weekends in the winter. The rink is located in the courtyard between Buildings 5 and 6, right next to the Game Room, where eight bucks gets you unlimited playing time at everything from ping pong and skee ball to Tekken 3 and Cruis'n Exotica.

New this season are the indoor pitches at Petanque by Carreau Club (the outdoor ones from last year are still operational as well), which is handy when it's freezing out and/or when you want to sit at the bar drink after a tough match. For an even more offbeat activity, Nazz Forge in Building 6 offers classes on such age-old trades as blacksmithing, knife-making, and leather-making.

Up on the second floor of Building 5, along a narrow corridor that's been branded as the Maker's Guild, you'll find a charming array of small shops from local artisans and designers. For Sea and Oats sells "ocean-friendly" naturally-derived skincare products, Hollander and Lexer features button-down shirts made from small batch Japanese cotton. and Ashya has contemporary leather bags and travel accessories.

There's a huge home furnishings and decor presence at Industry City, touted as the "Brooklyn Design District" and starring outlet stores from such heavy hitters as ABC Carpet and Home, Design Within Reach, Restoration Hardware, and West Elm. Shakuff Lighting specializes in handcrafted, custom made lighting, City Foundry is cluttered with restored vintage and antique furniture and artifacts, and Imports From Marrakesh sells "the latest 'must-haves' direct from the ancient Moroccan commerce center of Marrakech, including encaustic tiles, lighting, hand-woven carpets," and more.

There's plenty of fun stuff here too. The legendary St. Mark's Comics decamped to Industry City a few years back after more than three decades in the East Village, continuing to be a vital source of classic and current comics, graphic novels, and toys. Bookoff, in the loft at Japan Village, is your spot for manga and anime DVDs, video games, action figures, clothing, and accessories. And DUMBO's great Powerhouse Books has an expansive outpost in Building 3, featuring a well-curated selection of today's best, most interesting titles.

Industry City is located between 33rd and 37th Streets, and 2nd and 3rd Avenues, in Sunset Park, Brooklyn. And getting there is a breeze with the MTA. Just take the D, N, or R trains to 36th Street and walk one block west.

Just take the D, N, or R trains to 36th Street and walk one block west to Industry City