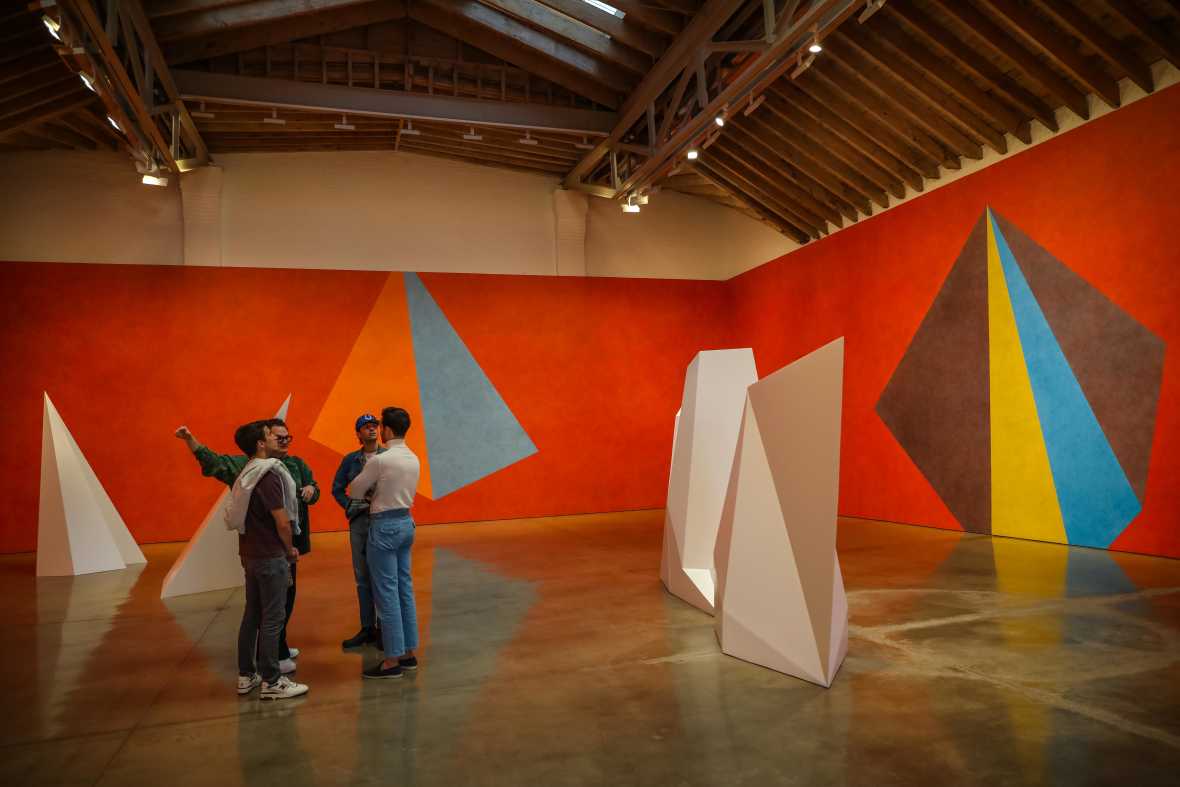 More than 300 contemporary art galleries call West Chelsea in Manhattan their home — or, in the case of some of these global art-dealing behemoths, one of their many homes — making this 10 block area over by the Hudson River one of New York City's great cultural treasures.

We're talking about dozens of museum-quality art exhibitions, with work from world-renowned artists, installed in exquisitely lit and designed spaces, all within easy walking distance of each other. Seriously, if you transported some of these shows to almost any other American city, they would be the highlight of the cultural year there.

There's no single way to enjoy an afternoon of Chelsea gallery going, either. You can be strategic, do some research, see what's currently on view, and plan for your visit with a focused itinerary.  Or you can approach it as a more serendipitous adventure, strolling up and down the streets, popping into wherever strikes your fancy, lingering if you like what you see, leaving immediately if not, ending your day the moment you've had enough. This makes for an exceptionally pleasant autumn excursion.

If you're new to the city consider this a beginner's guide to the Chelsea art scene, with a look at five of the biggest-name galleries over here, plus a few well-established, consistently vital spots to include in your regular rotation. And the best part: entry is always free.

David Zwirner has two huge galleries in Chelsea, a sprawling collection of connected buildings on West 19th Street with multiple exhibition spaces and what they call "the garage," where all the largest (and the wildest) installations are displayed; and the newer 30,000 square foot, five-story building on West 20th Street. The mega-dealer represents a staggering roster of artists, including Diane Arbus, Yayoi Kusama, Dan Flavin, William Eggleston, Isa Genzen, and Barbara Kruger, so there's always something interesting going on.

Another extremely blue-chip art world giant, Larry Gagosian has three locations in Chelsea, a relatively compact space on West 21st Street (though this is still very large by most standards) and two galleries on West 24th Street, including the massive flagship at 555 where some the city's great blockbuster shows have been held over years. Gagosian's roster reaches back into the modern and pop art eras, with the likes of Pablo Picasso, Roy Lichtenstein, and Francis Bacon joining such contemporary artists as Richard Serra and Damien Hirst.

If you can't make it up to Dia Beacon right now (though you should definitely go there, because it's awesome), the Dia outpost on West 22nd Street makes for a decent substitute. Dia's been in this neighborhood longer than almost anyone else — they moved here from SoHo in 1987, and basically ushered in Chelsea contemporary art era — but their current location only opened in 2021, and it's a stunner, with two big, gorgeous exhibition spaces, plus a bookstore and library. Note that Dia is a non-profit organization, so unlike at all of the other galleries over here, you can't buy the art.

Another heavyweight global operation, the Switzerland-based Hauser & Wirth made their presence in Chelsea permanent with the unveiling of their ground-up constructed, 36,000 square-foot, five-story building on West 22nd Street in 2020. The top floor gallery, with its oversized skylight, is particularly lovely. Jenny Holzer, Rashid Johnson, Lorna Simpson, Cindy Sherman, and Annie Leibovitz are among the contemporary artists under the Hauser & Wirth tent, though they also represent (and so exhibit for) the estates of such luminaries as Philip Guston, John Chamberlain, and Alexander Calder.

Pace has basically taken over West 25th Street. Not only did they open an incredibly opulent global headquarters on the block in 2019 — newly built, eight stories, 75,000-square-feet, with a Sky Terrace for heaven's sakes — they also kept their "old" space at 510, which also continues to host crowd-pleasing exhibitions. David Byrne, Richard Avedon, Tara Donovan, David Hockney, Jeff Koons, Yoshitomo Nara, James Turrell, and JR are just a small sampling of the artists you might find here. But that Sky Terrace is reason alone to check this place out if you've never been.

And there are so many more! On West 21st you have the newly reopened Paula Cooper, the stalwart 303 Gallery holding it down on the corner, and the reliably provocative Gladstone sitting mid-block. Matthew Marks and Sikkema Jenkins are always worth a look on West 22nd, as are Marianne Boesky on West 24th, and Marlborough on West 25th. But we recommend popping in almost anywhere as you walk by. You never know what's behind those frosted glass doors.

For most of the year, all Chelsea galleries are open on Tuesday through Saturday from 10 a.m. to 6 p.m., though in the summer most everything is closed on Saturday. Exhibition openings are generally held on Thursday or Friday evenings at 6 p.m., and often offer both free alcohol and superb people watching. Note that all of the galleries are located between Tenth and Eleventh Avenues.

Where To Relax After All That Art

Chelsea is packed with bars and restaurants, but if you just want to sit and chill outside somewhere, the new park on top of Pier 57, jutting out over the Hudson River at 15th Street, offers terrific views. And Little Island, which opened in 2021 around 13th Street and on the river, is still quite the spectacle.

Getting There With The MTA

The Chelsea Gallery District is located (roughly) from West 19th and West 27th Streets, between Tenth and Eleventh Avenues. The A, C or L trains to 14th Street, or the C to 23rd Street, puts you within a few blocks; as do the 1, 2, or 3 trains to 14th, or the 1 to 18th or 23rd.  The M12 or M11 buses, which run north and south, or the crosstown M23 and M14A, are good above-ground public transportation options.