Explore the Many Wonders of Grand Central, Hidden in Plain Sight 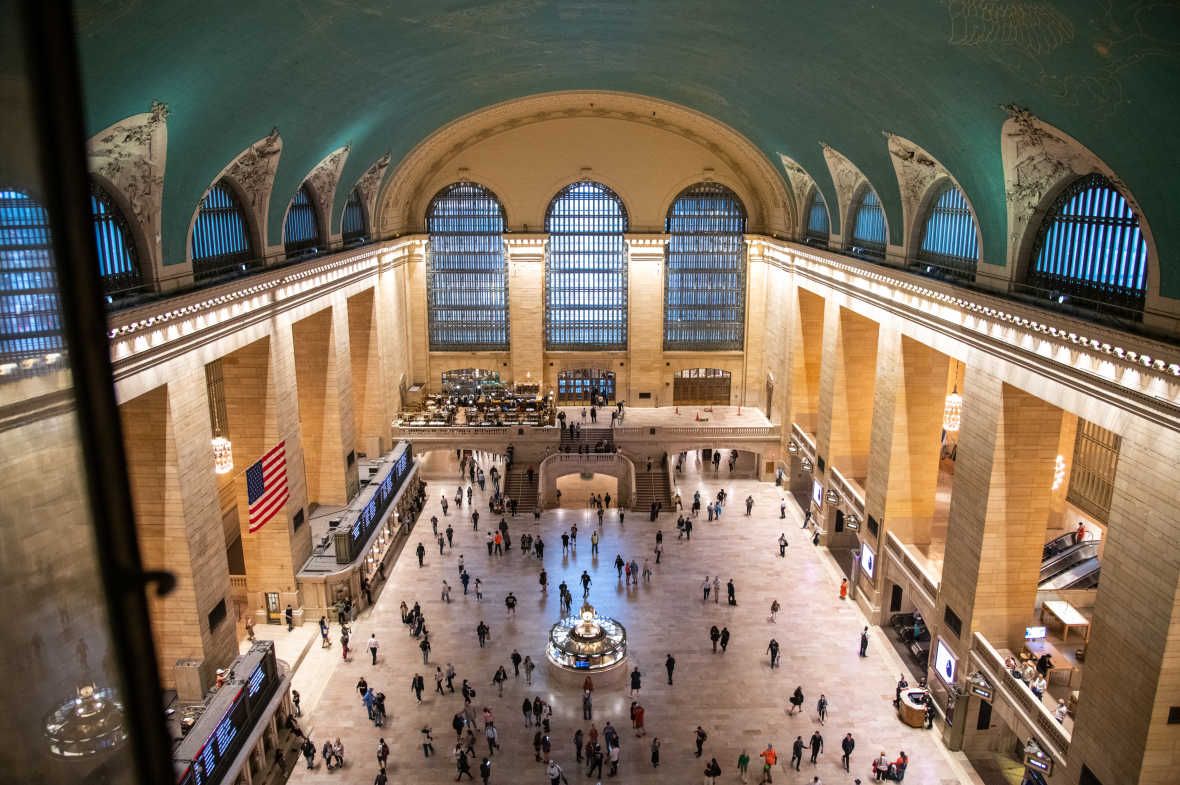 New York City is filled with incredible cultural institutions, and some of its buildings are museums in their own right. Take Grand Central Terminal, for example—often the starting point or end of your journey, but a destination all on its own.

The building, which opened in 1913, holds historical artifacts, secrets, and passed down mythology at every turn. The below guide offers insight into the building and its many details, and will help you be a know-it-all when you pass through next time.

If you want to see the below all for yourself alongside an expert guide, you can sign up to take a tour via City Experiences, Grand Central's official tour operator.

This small, dirty patch can be spotted from the floor of the main concourse, and sits in the northwest corner of the vibrant constellation-filled ceiling. It serves as an example of how the entire ceiling would look if it weren’t routinely cleaned, shaded by ages of exposure to pollutants (mainly cigarette smoke, from an era when that was allowed).

The decision to keep this 9” x 18” patch of ceiling dirty came in the 1990s, during a major restoration and cleaning effort, and now offers and a satisfying before-and-after for anyone paying attention.

The MTA's Marjorie Anders once explained, "The area was left untreated by the cleaning solutions so that future preservationists will be able to tell if those solutions had any impact on the ceiling materials themselves. This is common practice among restoration artists."

Central Cellars Wines & Spirits (across from Track 17) is a great spot to pick up a bottle on your way out of, or back into, town. But this space was originally created for a different purpose: it used to be part of the Grand Central Theatre, which opened in the 1930s. During the Terminal's renovations in the 1990s, a false ceiling was removed to uncover the original mural in the theater, which remains today.

In its glory days, the theater housed 242 seats, with some standing room in the back, and a bar by the entrance. The New York Times reported that the mural was painted by the theater's designer, Tony Sarg. In an article upon its opening in 1937, the paper reported that they witnessed Sarg telling a painter, "Paint the ceiling a flat sky blue, and sometime tomorrow I'll come around and paint the stars on it myself."

The theater mostly featured "up-to-the-minute" newsreels, so commuters could keep up to date with the latest headlines.

While the information booth’s circa-1913 clock is a show-stopping centerpiece (and a great meeting place) in the center of the main concourse, there’s more going on over there than the eye can see.

The brass center inside of the booth features a door, which leads to a spiral staircase used by employees to get from the lower level to the main floor, and vice versa. Nothing says old school architecture like a secret doorway!

Even small things you may not take notice of could be a part of the building's long history, so keep an eye out for details.

For example, you'll find these old drawers under the more modern day screens outside of each track entrance (which are called gate boards). These drawers were used to hold the train schedules back in the analog days.

Speaking of details, have you seen the acorns? These represent the Vanderbilt family, along with the accompanying oak leaves. Before Grand Central Terminal, there was Grand Central Depot and Grand Central Station, built by railroad tycoon Cornelius Vanderbilt.

While he was no longer alive when Grand Central Terminal opened, the Vanderbilt family financed its construction. And so, the interior of Grand Central features these sculpted elements as a nod to the railroad family's motto: "Great oaks from little acorns grow."

Find them all over the building, including on top of the information booth's clock!

Speaking of clocks, in 1914 the building's massive Tiffany clock was installed, becoming the world's largest Tiffany clock at around 14-feet.

The clock, which faces 42nd Street, was restored by Rohlf's in 1992, which was a slow process given it needed to be disassembled piece by piece and carried through a tricky area (it sits in a small clock room, reachable via a narrow staircase). This process spanned 12 years!

As Grand Central points out, "all clocks in the Terminal [are] set by the atomic clock in the U.S. Naval Observatory in Washington, DC, and [are] accurate to within 1 second every 20 billion years!"

Perhaps the best-known feature of Grand Central Terminal is the Whispering Gallery, located near the Oyster Bar. This area is a beautiful site on its own, featuring iconic Guastavino tilework, but the vaulted ceiling is also an acoustic wonder acting as a whispering gallery.

To enjoy this feature, one person stands at the end of one arch, and whispers directly at the wall, so that the person at the other side of that arch can hear them.

How does it work? All That’s Interesting explains, “The sound waves are trapped and have no choice but to shoot up and follow the arch to another corner. The waves, which are sometimes called whispering-gallery waves, cling to the walls as they travel around the arch’s circumference.”

The Vanderbilt family was proud that Grand Central was one of the world’s first all-electric buildings, and because of that the light fixtures were presented simply, through thousands of exposed bulbs, including these bare-bulb chandeliers hanging below skylights.

The incandescent bulbs from the earlier era of the station have since been replaced with more cost-effective "compact fluorescent bulbs, a move that benefits the environment," the New York Times noted. But the style of their presentation remains, and has become a trademark look of the terminal.

Behind the grand, arched windows on the east and west sides of the main concourse, are walkways that overlook it all, giving anyone who passes through them a rare bird’s eye view of the bustling transit terminal.

While they are not open to the public (aside from during special tours), they are viewable from the main concourse.

The Campbell, as it is now called, has had many lives, both private and public.

The space started off as an office for John W. Campbell in 1923, as he served on New York Central’s board of directors. Campbell used it to not just work, but to entertain – it had a pipe organ, piano, fireplace, plenty of cocktails to go around, and there was even a butler on hand, named Stackhouse. When he died in 1957, however, the gorgeous space deteriorated and drop ceilings were installed.

The once grand room was then used as a signalman’s office, a storage closet, and even a jail before it was returned to its glory.

In 1999, it became the Campbell Apartment, a bar that the public could enjoy, which has now been renamed to The Campbell by its new owners. Carve out some extra time before or after your next train ride to enjoy this space.

The best-kept secret in a town that’s gone all in on tennis (so much so, that it’s difficult to score a public court).  The Vanderbilt Tennis Club is open to all, but you'll need to reserve and pay for court time. There are full size courts, as well as smaller practice courts. The club is open daily from 6 a.m. to 2 a.m. You can find the hourly rate sheet here, and late night discounted rates here.

The courts are located in the Annex, reachable by elevator (try the one close to The Campbell, or on the ramp near the Oyster Bar). Prior to the courts, this space was used for everything from a TV studio to an indoor ski slope!

This eagle is a remnant of the old Grand Central Station, which along with 12 other eagles was on the roof of that building until its demolition in the late 1800s.

This eagle was installed here in 2004, along with an accompanying plaque that reads: "It was graciously given to MTA-Metro North Railroad by the Capuchin Franciscan friars in 2001, after spending many years mounted on a bluff overlooking the Hudson River on the former estate of U.S. Representative Hamilton Fish in Garrison, N.Y. After undergoing extensive restoration, it was installed at this location, complementing the other original eagle perched above the entrance to Grand Central off Lexington Avenue at 43rd Street."

The eagle's wingspan is around 13-feet, and the piece weighs one-and-a-half tons!

Want to show your love for this landmark? Shop Grand Central merch at the MTA Store!