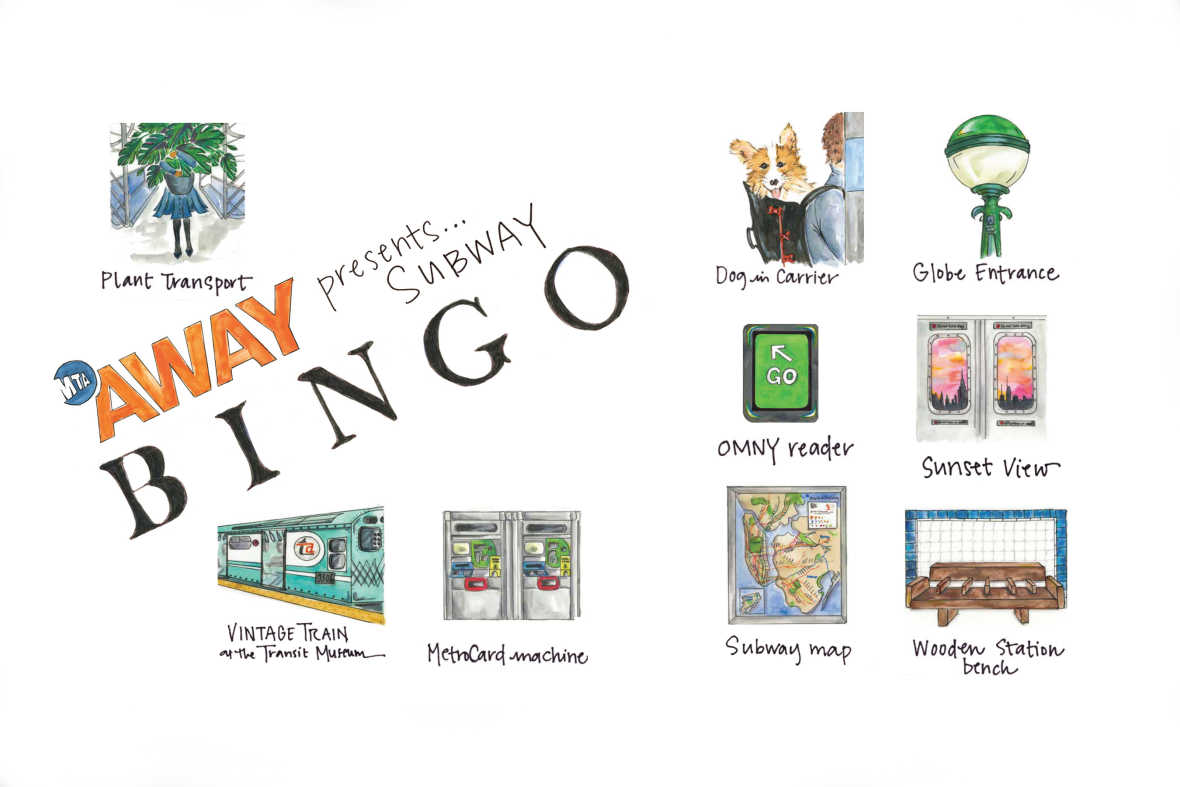 WELCOME TO SUBWAY BINGO! This card is a celebration of the now 118 year old system that keeps us moving and connected to all the people and things and reasons we live in (or visit) New York City. The daily moments (spotting a new book), the history (an old headhouse), or even design inspiration (those iconic wooden benches!). The squares on our bingo card depict something you can find in, or in some cases near, the subway system (more on that below). Each square was hand-painted by NYC-based artist Sarah Butler.

"Riding the New York City subway is like traveling through time," Butler says. "When I pay attention, echoes of the different eras of design and artistic collaboration will open up before me: tilework from 1904, beaux-arts arches from 1919, shiny chrome newsstands from the 1950s, globe lights from the 1980s, soon-to-be retired MetroCard machines from 1999.  And all can be observed on the way to my dentist in Midtown, on my daily commute through Brooklyn, or on my way to the Rockaways for tacos and a swim."

To play, you can print out a copy of the card, or just save the card to your phone. Additionally, there will be a limited amount of printed copies — free of charge, while supplies last — at the New York Transit Museum in Brooklyn, and at their shops at 2 Broadway in Lower Manhattan and inside Grand Central Terminal.

Once you have your card, scroll down for more details.

Note: We may share your photos on MTAaway.com, as well as MTA social platforms.

WHAT'S ON THE CARD?

Called "a modernist icon" by Dwell, the classic wooden subway bench has lived through many eras of the transit system, with transformations along the way, and can still be found in stations today.

A ubiquitous sight while riding the subway — and any tote will do, so this one should be easy to spot!

Did you know that the globes are trying to tell you something? From the Transit Museum: "Color-coding of entrance globes began in the early 1980s to help customers determine which entrances were open and had a manned booth. Originally, green indicated a 24-hour token booth, yellow meant a part-time booth, and red meant entrance limited or exit only. Yellow lights were later discontinued for simplification and after the introduction of the MetroCard and installation of High Entrance and Exit Turnstiles (HEET), exit only indicators were no longer needed."

Today, most globes are green, though there are some red ones out there — we'll accept either for bingo!

Another common site in the system are these delightful little poems from MTA Arts + Design. You'll find both print and digital versions of these in stations and on subway cars. The Poetry in Motion program was launched in 1992, with works selected by representatives from the MTA and the Poetry Society of America. The first poems to appear in the transit system were "Crossing Brooklyn Ferry" by Walt Whitman, "Hope is the Thing with Feathers" by Emily Dickinson, "When You Are Old" by William Butler Yeats, and "Let There Be New Flowering" by Lucille Clifton.

They're all over the system, so this one should be easy. You may even spot one next to a Poetry in Motion poem — we call that a bingo two-fer. The newest subway map offers a nod to the iconic 1970s map, designed by Massimo Vignelli.

The subway system is an art gallery, with beautiful commissioned artworks by the MTA Arts + Design team all over the system. The pictured mosaic is at the 28th Street station (on the Lexington Avenue 4 and 6 line), which features floral mosaics by artist Nancy Blum.

While they aren't on every platform, or in every station, you'll still find subway newsstands throughout the system, selling newspapers, drinks, candy bars and other snacks. (You can also submit closed newsstand photos if you catch one off-hours.)

OMNY can be used by tapping your contactless card, by adding a payment card to your digital wallet, then tapping your device at an OMNY reader, or by using an OMNY card (which you can fill with cash). OMNY cards can be found at stores across the city, including Walgreens, CVS, 7-Eleven, and independent pharmacies. Visit the OMNY retail locator to find one near you.

This one is self-explanatory, but we'd like to recommend a nice shot through the windows while traveling over a bridge.

Once known as token booths, the station booths sit by the turnstiles and continue to help serve New Yorkers and tourists today.

The subway can be a great place to spot a new book you want to read! For this square, we'll accept a photo of your own current read on the subway, or a fellow passenger's book.

To get this square, any vintage train at the Transit Museum (located at 99 Schermerhorn St in Brooklyn) will do! The one on this bingo card is the Bluebird, these R-33WF cars were painted turquoise for the 1964-65 World’s Fair in Flushing, Queens. One resides in the Museum today, alongside the rest of their vintage fleet. During the museum's Nostalgia Train rides, you'll also be able to find some of their fleet at a station near you.

Some of New York's most talented musicians are playing underground as part of MTA Arts + Design's Music Under New York program. You'll notice them from their pink banners, but for this square, we'll accept any busker you run across in the transit system.

The dog in our card was inspired by Maxine the Corgi, who helped the MTA create a perfect dog carrier for the commuting pup (and human). Dogs are allowed on the subway, but only in proper carriers... and boy do they look cute in them.

The subway is great for transporting nature, and plants can be a delightful thing to spot while underground! For this square, we'll accept anything from flowers to houseplants to potted trees, and everything in between.

You should be able to spot our ads all over the system, look for the MTA Away logo! Many also have green or orange coloring. And yes, our ad for Subway Bingo counts.

This is yet another delightful scene that, if you're in New York long enough, you'll certainly see multiple times. The more balloons the better, but to win bingo you only need to spot one.

Subway escalators are as old as the system itself — the first being built with stations in the early 1900s. You'll find them in many stations today, including the one in this photo, which shows the escalator from the Wall Street stop into 60 Wall Street's dazzling atrium. (There are also subway globes at the top, so you'll get a two-fer here.)

It's great subway etiquette to put your backpack on your lap while seated on the subway—you're bagspreading if you put it on the empty seat beside you. And if you're standing, it's also considerate to take off your backpack and hold it toward the ground while riding in a crowded train car.

These won't be around for too much longer, so get your shots now! They were installed in the 1990s and will end their run soon, as OMNY becomes the sole payment method for all mass transit trips. But for now, you'll find them at every station.

They're in every station, and you'll find them right at the turnstile. OMNY is replacing the MetroCard, and you can start using it now — here's how!

Bonus points if you spot a random act of kindness involving a stranger helping a parent or childcare provider to carry a stroller up or down subway stairs.

Sometimes you want to take your bike on the subway, and that's fine! Here's a how-to guide on taking your bike on public transit. Hopefully, you will spot some fellow straphangers with a two-wheel ride on your commute, and if you do, don't forget to thank them for helping you achieve Bingo.

What's a headhouse? These are simply an aboveground part of a subway station. Headhouses of any era are accepted!

Don't forget to tag @MTAaway on Instagram in your bingo photos!