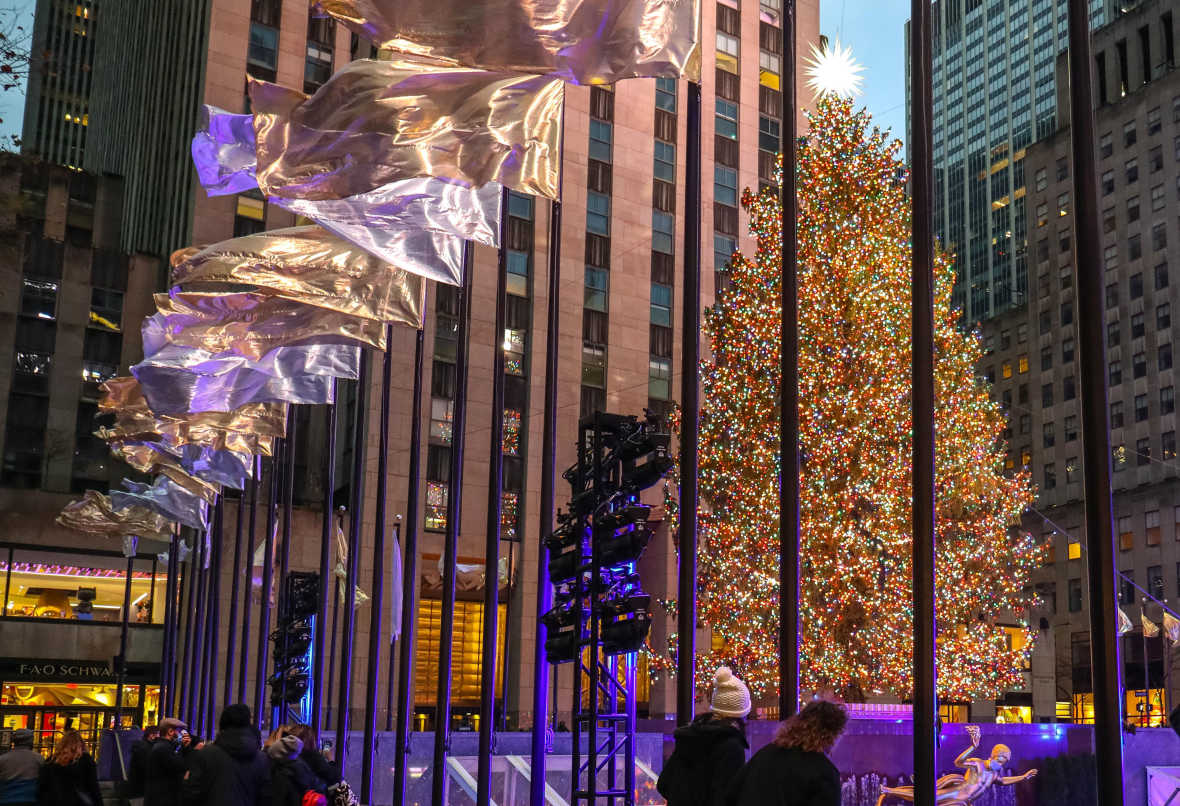 No one does the holiday season better than New York City—literally millions of people come from all over the world every year just to bask in our holiday spirit. And Rockefeller Center is at the heart of it all.

There's the famous Rockefeller Center Christmas Tree, of course, which has lit up the Midtown plaza for more than 80 years, with the iconic ice skating rink below. Complementing it all is the holiday light show put on by Saks Fifth Avenue right across the way, which in recent years has become its own attraction, all adding to the huge crowds at the historic art deco complex.

Rock Center has also made a huge push to amp up its food and beverage game recently, adding a bunch of first-rate fast-casual spots to the concourse as well as an impressive number of exciting (and even hip!) new restaurants from some of the city's best chefs.

Whether you're a New Yorker or visiting, find a complete guide to getting the most out of this NYC treasure over the holiday season below.

The 2022 tree arrived as scheduled before dawn on November 12th, and the ritual of getting it off the flatbed truck, driving the spike into the trunk, and then hoisting the magnificent Norway Spruce up and into its stand attracted a larger crowd than usual to this under-publicized spectacle, probably due to the unusually warm weather.

The tree this year is a gift from the Liebowitz family, and it comes from Queensbury, New York. It's 82-feet tall, 50-feet wide, and weighs about 14 tons. The spruce was about 85 to 90 years old when it was felled for its role as the world's most famous Christmas tree. And as far as anyone could tell there were no owls still nestled in its branches when it arrived in the big city.  However, there was an owl mascot on hand for the festivities.

The tree lighting extravaganza will be held on the evening of November 30th, but before then the spruce gets decorated with more than 50,000 multi-colored LEDs strung over five miles of wire, powered in part by hundreds of solar panels on the roof of one of Rock Center's buildings. Topping things off is a glittering 900-pound star, a three-dimensional stunner featuring 70 spikes covered in three million Swarovski crystals.

There will be huge crowds at the lighting ceremony, but you can enjoy the end result in a slightly less hectic setting between December 1st through mid-January, every day from 6 a.m. to midnight, and for all 24 hours of Christmas Day.

The Christmas windows in all of the luxury shops along this part of Fifth Avenue have long been a big draw for festive-feeling seekers, but in 2004 Saks Fifth Avenue really upped the ante with its spectacular Holiday Light Show, which has evolved into a repeating three-and-a-half minute performance involving hundreds of thousands of LEDs dancing across the entire facade of the department store.

Located right across the street from the Rockefeller Center tree and including a seasonal soundtrack blasted at an incredibly loud volume, the Holiday Light Show really solidifies this spot as NYC's Christmas Central. The show runs once every ten minutes between 5 p.m. and 11 p.m. nightly, starting on November 22nd until the New Year.

Note: Fifth Avenue from 49th Street to 57th Street will be closed to vehicular traffic for three Sundays in December ( 4th, 11th, and 18th) between the hours of noon and 6 p.m. as part of "Fifth Avenue for All."

The Rockefeller Center Rink is open for the season, which means you can go skating here anytime through the beginning of April. But the best time to take a few laps around this iconic patch of ice is during the holidays, when the tree is twinkling, the music is merry and bright, and it's easy to feel like you're right in the middle of the best Christmas city in the world.

Advance tickets are available now for hour-long sessions through the New Year, and they are selling out fast.

One of the most surprising developments in the NYC restaurant scene these past few years has been the sudden rise of Rockefeller Center as an actual dining destination.

On the casual, counter-service side of things, start with Samesa, Eli and Max Sussman's superb Mediterranean spot starring one of the best chicken shawarmas in town. There are lots of vegan and vegetarian options here too.

Another very good choice for something both hearty and healthy is chef JJ Johnson's Field Trip, an outpost of his Harlem hit that highlights rice-based dishes from different cultures around the world.

All of the above, and many other fast-casual spots, sit in the concourse level of the complex, hard by The Rink. But another terrific eating option just opened out on Sixth Avenue, a new location of the great Breads Bakery mini-chain. In addition to all of Breads usual array of first-rate baked goods, both sweet and savory, the new place features two Rock Center exclusives: an updated version of the iconic New York pretzel, made with rye sourdough and served with mustard; and a "Pockets of Sunshine Babka," a citrus-infused collab with the "Mayor of 30 Rock," Al Roker.

The first of the new breed of high-end restaurants to open here was the acclaimed bakery-cafe Lodi from Ignacio Mattos, which landed in the southern plaza in the summer of 2021. This place has everything from soups, porchetta panini, and one of the best chocolate croissants you'll ever eat (it's shaped like a mini loaf of bread) to cocktails and fancy wines poured at sit-down dinners.

Speaking of acclaimed, Le Rock, located in the complex's northern plaza, just earned a rare three-star review from the New York Times, so don't expect to be able to waltz in and get a table during prime time. But definitely try to eat here sometime soon; run by the team behind the sceney Frenchette down in Tribeca, this is instantly one of NYC's must-try restaurants.

Even cool Brooklyn spots are coming to Midtown now!

Currently in soft-open mode, the brand new 21 Greenpoint in the concourse level has a limited menu of delightful dishes like their Open Faced Crab Toast, Crunchy Broccoli Salad, and a delicious Ceviche.

The sleek and sophisticated Naro also opened just recently, from Junghyun “JP” and Ellia Park, the couple behind the much-lauded Atomix. Located right near The Rink, Naro offers a 12-course, Korean-inspired, $195 tasting menu at dinner.

Coming soon, hopefully by the time the tree is lit: Five Acres, a "vegetable-forward" spot from Greg Baxtrom, whose other restaurants, Olmstead, Maison Yaki, and Patti Ann's, all within blocks of each other in Prospects Heights, are among the best in Brooklyn.

And then there's the elegant, 145-seat Jupiter, a pasta-and-wine place from the owners of the beloved King in Hudson Square, Jess Shadbolt, Annie Shi, and Clare de Boer.

If you just want to hang out and enjoy a holiday spirit, Rockefeller Center has got you covered. City Winery has a nifty "Winter Domes" outdoor setup; The Other Half brewery, with an entrance on Fifth Avenue, sells lots of different canned beers; and the Pebble Bar is a happening cocktail spot located in that historic townhouse on the corner of Sixth Avenue, the only holdout from when they demolished the area in the 1930s, and where Hurley's held it down for more than a century.

And remember, by far the easiest way to get to the center of it all is via the MTA, with multiple subway lines putting you within a block or two of the complex, including the B, D, F, and M trains to the 47-50 Street station, the E train to 5th Avenue-53 Street, the 1 train to 50th Street, and the N, Q, R, W to 49th Street. The M1, M2, M3, and M4 buses stop right nearby on Fifth Avenue as well.