Surf's Up and More in Long Beach, the City by the Sea 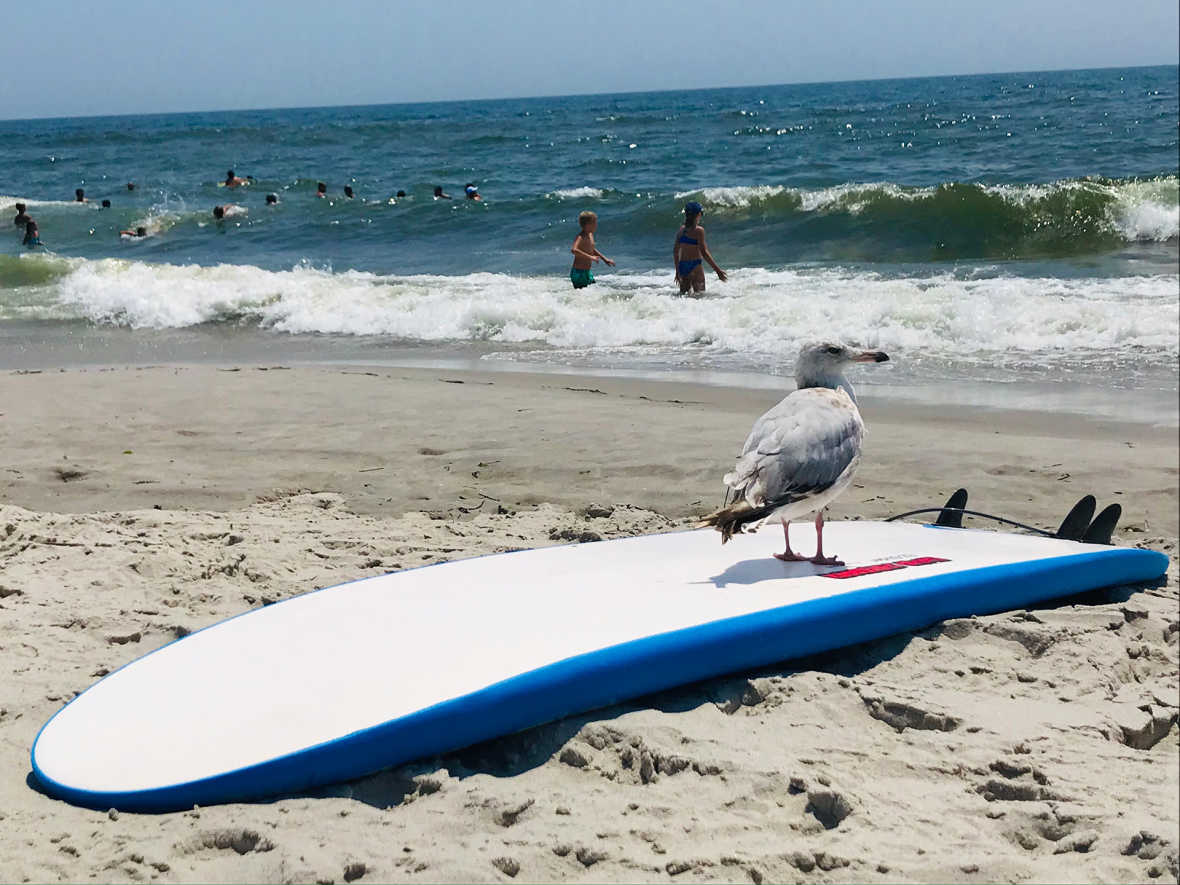 Did you know there’s a lively surf scene on Long Beach, Long Island, where pro surfer Balaram Stack honed his aerial skills before becoming a champion? Or that Long Beach waves were worthy enough to host the 2011 QuikSilver Pro world tour and the 2019 World Surf League Longboard Classic?

“I feel like we’re pretty fortunate to get good quality surf here, when it’s good,” says longtime surfer Dave Juan, noting the waves from Atlantic swells. “The waves here are a little bit more consistent than the Rockaways, so it makes it a little bit easier."

As co-owner of beloved local surf shop Unsound Surf, Juan and his partner, Mike Nelson, have been pillars of this tight-knit surfing community for over 20 years. Sporting long, light brown hair and the chilled-out demeanor of surfers, he runs the sizable shop brimming with bright surf gear and skating paraphernalia. Locals know it as a hub of the Long Beach surfing community, which Juan has completely embraced.

“There’s always been a lot of good surfers here,” he says. “And it's always been known as a good surf location, so that's part of the draw. People think it’s like a city, but it’s not like a city at all. It’s a small town.”

7 blocks to the beach

Just a 40-minute Long Island Rail Road train ride from Penn Station will take you to this City by the Sea. From the train station, you can catch one of Long Beach's old-school trolleys—essentially vintage city buses with hop-on/hop-off service. The East End trolley makes stops as it loops to and from the eastern half of the town’s 3.5-mile-long white-sand beach.

“I've been to a lot of beaches around the US, and this is right with any great beach around,” says Paul Gillespie, Chief of Lifeguards, who’s seen Long Beach evolve over 52 years of patrolling its shore. He kept watch as locals and visitors played in the crashing waves, built sand sculptures, and curled under umbrellas with books.

Most of the beach is flanked by a 2.1-mile boardwalk that supports boardwalk eateries and surfers cycling or walking their surfboards to known surf spots. Local surfers know the areas where breaks are best as “Lincoln” and “Pacific,” named for nearby cross streets.

While the East End trolley is convenient, the closest beach entrance from the train station is just a casual five-block walk away. Once there, you can’t miss the lot of food trucks known as The Shoregasboard, where Corazon de Cuba serves up crispy Cuban sandwiches oozing with Swiss cheese; Greek On-the-Go slings lambs gyros on soft pitas, garnished with cool, refreshing tzatziki; and Taco Tuesdays serves flavorful street-style tacos with chicken, pork, steak, or fish—any day of the week.

On the boardwalk nearby is Skudin Surf, named for a surfing family that spans three generations. It’s another hub of the local surfing community, which rents surfboards (call ahead) and offers lessons.

“My grandfather taught surfing. My mom taught surfing. So me and my brother, Cliff, are just carrying on our family heritage,” says Will Skudin, who runs the shop with his older brother. Their goal is to pass on their knowledge and joy of surfing, in kids and adult surf camps.

For Skudin, it’s a way of giving back to the local community he’s known since he was a child.

“It's been a community of love and support for each other for so long,” he says, “and I've never felt that anywhere else I've ever gone my whole life.”

After a surf sesh, locals know to head to the West End, a lively, very walkable hub of restaurants and bars that sometimes feels like Spring Break. From The Shoregasboard, it’s just a half-hour westbound stroll down the boardwalk. (The West End trolley also loops from the LIRR station about every half hour on weekends.)

West Beech Street is the main drag of all the West End haunts, many featuring live music or DJs at night, so a post-surf party is never far. The Cabana serves American and Mexican fare—from tacos to chimichangas—with a colorful surf decor. Minnesota’s serves shrimp po’ boys and fries smothered in chunky lobster bisque to patrons seated outside or at the bar illuminated by TVs tuned to sports—when they’re not getting down on the dance floor nearby. For those craving a traditional Irish-style pint, there’s Shine’s Bar, which has been going since 1912.

Away from the main drag, newer outposts like Five Ocean elevate the local culinary scene with fresh, elegantly prepared seafood. Converted from an old beachfront pizza joint in May of 2019, Five Ocean is now a surfer-friendly, coastal-chic restaurant where Chef Craig Attwood pairs dishes like grilled octopus, ceviche, and saffron cream-smothered mussels with wines in his ever-expanding list.

If beer is more your speed, there’s no shortage of that in the West End. Closer to the train station, Bright Eye Beer Co. is the only in-town brewery and taproom, with quirky names like “Clam Juice” (a pale ale) and “The Fish are Biting,” a Mexican lager collab with Long Beach Brewing (ironically in Oceanside). On the same block is The Anchor Tavern, where surfers catch Beatles and Bob Marley cover bands.

After a day of surfing, dinner, and drinks on the West End, there’s no need to feel guilty about hanging until 10 o’clock or later. So chill out, dude—the last train of regular LIRR service is just after midnight.