Where to Find Outdoor Ice Skating Rinks in NYC 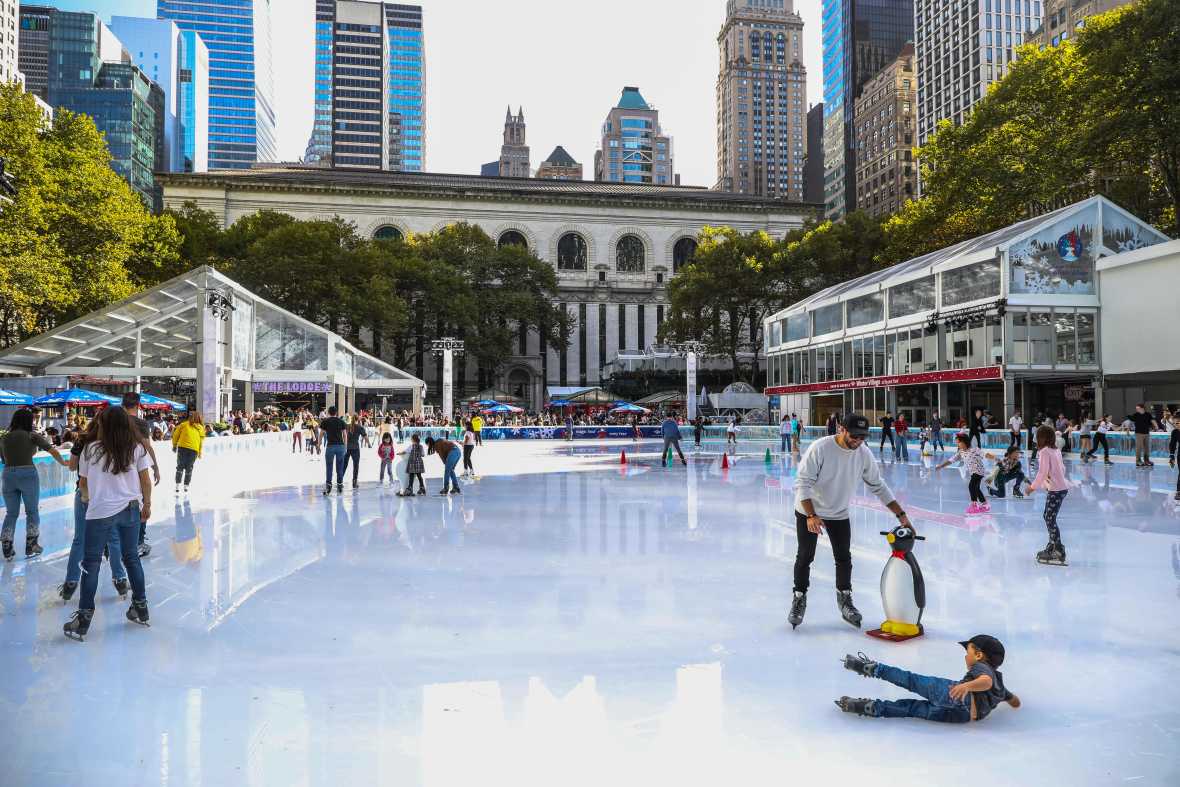 Ice skating in New York City is a blast all winter long — the outdoor exercise and rosy cheeks! The music and lights! The hot chocolate! But the best time to snap on those new high-tech rental skates and try not to tumble out there on the ice is during NYC's most festive holiday season between now and the New Year.

Here's a look at the city's outdoor ice rinks — they vary in size and cost and vibe, but are all easily reached by public transportation.

The city's largest outdoor rink also commands one of its prettiest settings, sitting in a natural bowl in Central Park's southeast corner right near the picturesque Gapstow Bridge (and, usually, some good duck spotting on the pond). Plus the whole facility recently underwent a much-needed renovation, so in many ways this old favorite is also one of our newest rinks. Spectators can get a great view from the Overlook, too, where the legendary Harlem soul food restaurant Melba's operates a kiosk. Adults should expect to spend about $35 for ice time at peak hours and skate rental.

Located at the southeast corner of Central Park, enter at East 59th Street and Fifth or Sixth Avenues and then walk inside the park. More details here.

Several subway lines are under 10 minutes from the rink

The Rink at Winter Village in Bryant Park

It's quite a lively scene at the skating rink at Bryant Park, what with the ever-more sprawling and lavish Winter Village complex offering gift shops, snack stalls, bars, and "cozy igloos" near the ice and the spectator patio, where non-skaters can sit at tables and hang and eat and drink. The ice time is free here, just note that if you don't bring your own blades, skate rentals will cost you as much as $36 during peak times.

Many trains will bring you close to this Midtown rink!

The Rink at Rockefeller Center

The ice rink at Rockefeller Center in Midtown, set right below the world's most famous Christmas tree, is pretty much at the center of NYC's holiday season spectacles. But even after the non-festive part of winter sets in, Rock Center is still an exceptionally pleasant place to skate, not least because of all the incredible new dining options, both casual and fancy, that have opened in the complex in just the last year.

In addition to the subway, the M1, M2, M3, and M4 buses stop right nearby on Fifth Avenue as well.

The great Governors Island has been getting into the skating game for a couple of years now, and although the rink here is small, the setting at the north end of stately Colonels Row, not to mention the brisk ferry ride across the harbor to get here, makes an hour or so of skating feel like a whole afternoon adventure. There are several fire pits for gathering 'round, food trucks will make an appearance rinkside all season long, and there's an excellent new public artwork by the water that's kind of a must-see, the monumental "Moving Chains" by Charles Gaines. Ice time and rental skates cost adults around $25 on the weekend, advance tickets recommended.

A pair of ice skating rinks came to the southeast corner of Brooklyn's Prospect Park in 2013, one truly outdoors, the other covered by a roof (but still open-air), and local families and teens have been tearing up the ice here all winter long ever since. The music at Lefrak is more contemporary hip-hop crowd-pleasers rather than the standard twinkling piano holiday tunes, and the Bluestone Cafe sells snacks, coffee, hot chocolate, and alcohol.

The B, Q, and S trains to the Prospect Park station gets you close to the rink

The rink is NHL regulation size up here at the Riverbank State Park, the sprawling sports and leisure complex built in the 1990s. And the price is right, at a nice and low $5 for adults to get out on the ice, $3 for kids, and only $6 to rent skates. The locker rooms are comfortable, the rink itself is covered (but open on the sides for that nice fresh winter air), and there's stadium seating for spectators. Is this the best ice rink in the city? The only downside we can find is that it's only open on Friday evenings and weekends.

The entrance to the park is located at 679 Riverside Drive at 145th Street; just follow the signs once you get in. More details here.

Probably the smallest of all the rinks on this list — it's definitely more for kids goofing around than any sort of serious skating — but there's so much going on at Industry City these days, with its dozens of restaurants, bars, bakeries, all sorts of shops, game rooms, and art installations, that everyone can have a good time over here by the river in Brooklyn's Sunset Park. The rink is open Friday evening and weekends only, and costs $15 to get out on the ice, and another $10 for skate rentals.

Located in the Industry Courtyard between buildings 5 and 6, between 34th and 35th Streets. More details here.

Take the D, N, Q, R, or W trains to the 36th Street station and walk one block west and across Third Avenue

The Rink at Brookfield Place

These pop-up rinks from real estate developers are becoming more and more common, functioning as both an amenity for residents in the buildings above and as a lure to bring non-residents to the area. Which is good news for everyone who enjoys a good skate on a chilly day and something warm to eat and drink afterward! The Brookfield Place rink is right on the Hudson River, so the views are lovely, and there are many restaurants and bars located within steps of ice. Adults can expect to pay about $24 for ice time and skate rentals on the weekends.

Located at 230 Vesey Street, behind the Winter Garden and the Brookfield Place mall. More details here.

Many trains will get you close to this rink!

The Rink at Manhattan West

Brookfield's other rink is at their other big development in the city, which they call "Manhattan West" and basically sits between Moynihan Station and Hudson Yards. The ice itself is surprisingly large, given that it's located in a snug little plaza between office and residential towers, and there are numerous drinking (alcohol or hot cocoa) and dining (snacks or fancy dinners) right nearby, including a branch of the excellent Daily Provisions mini-chain. Ice time and rental skates will set you back $30 if it's a weekend.

Located at 385 Ninth Avenue, which you can enter at what would be 32nd Street. More details here.

These trains get you within a few blocks of the rink

Ice Rink at the Seaport

Gone are the days when the Seaport Ice Rink was one of those plastic fake ones squeezed between the shops onto the tail end of Fulton Street. Now there's actual ice, it's decently sized for a pop-up, there's a light show called "Aurora" installed over the surface, and it's out on Pier 17, where there's room to hang and soak up the vibes. There are plenty of good indoor eating and drinking establishments right next door, too, including the Jean Georges French-food theme park, the Tin Building, and Mister Dips, home to one of the best fast casual burgers in town. Skating is free, but rental skates cost anywhere from $20 to $35.

ArtRink at the Brooklyn Children's Museum

Located atop the Brooklyn Children's Museum in Crown Heights, the ArtRink is made of synthetic ice, but it's quite large, some 3,000 square feet, and it's surrounded by works from local artists and five interactive playhouses, so it seems like kids will have a blast. Getting in the rink costs $10, rental skates included, in addition to the regular museum admission fee.

The A or C train to Nostrand Avenue, or the 2, 3, 4 trains to Kingston Avenue, are your best bets for getting here

More Brooklyn rooftop skating, also on synthetic ice, though the vibe here atop Williamsburg's trendy William Vale Hotel is definitely more grown-up than at the Children's Museum. The Vale Rink is part of a whole Winter Village experience, dramatic skyline views are in the offing, and cheese fondue is on the menu.

Take the L train to Bedford Avenue, or the G train to Nassau

⛸️ Note: For the more adventurous, there's the Cloves Lake Park rink on Staten Island — it's situated several miles from the Staten Island Ferry slip in St. George, making it a bit more difficult to get to via public transit, but it's a nice-sized, uncrowded patch of ice. Skating costs $12, skate rentals are $7. Cash only.