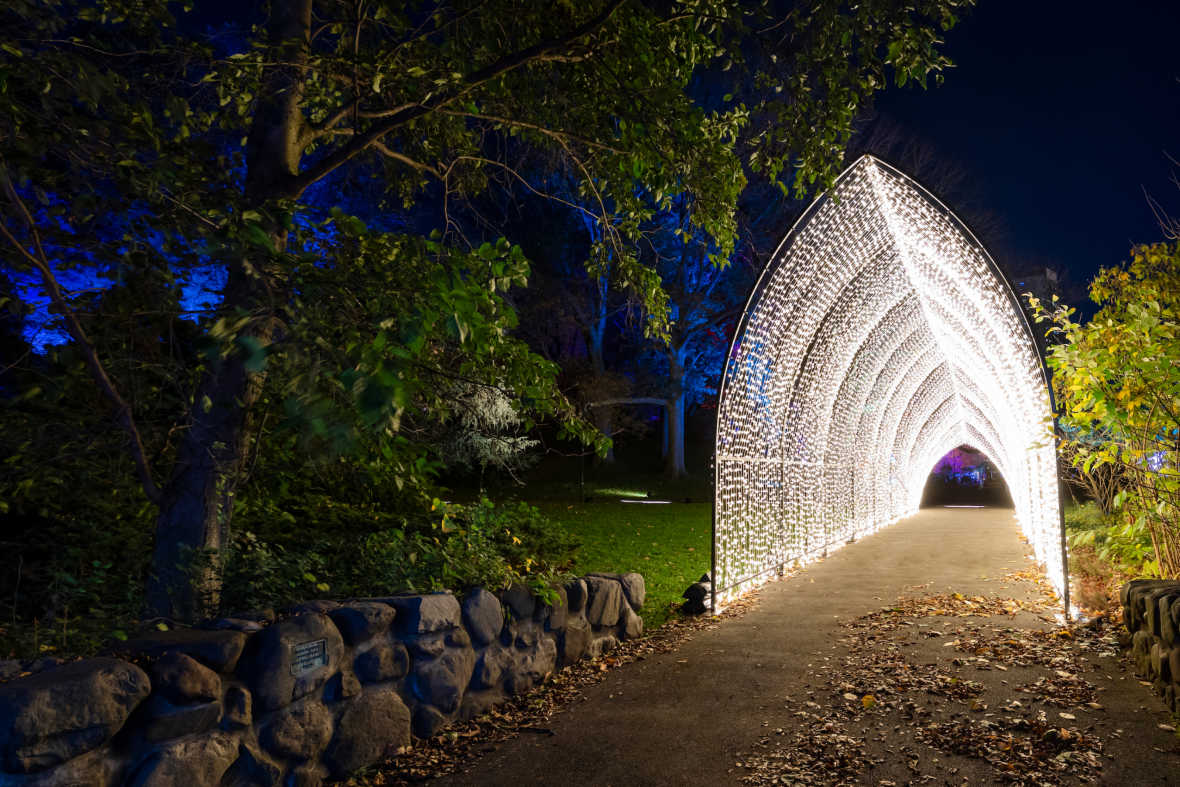 'Tis the season for a holiday light show... or two or three or four (why not experience them all?). There are plenty of dazzling displays across the region—and you can take the subway, bus, LIRR, or Metro-North to transport yourself into a glittering wonderland.

The stunning grounds of the New York Botanical Garden are decked with thousands of LED lights during NYBG GLOW. Held throughout select November, December, and January evenings, visitors can see the garden’s famous buildings awash in colors as well as a brand new display in the Native Plant Garden—60 glowing orbs in the water.

You can also upgrade your NYBG GLOW to combine with the NYBG’s beloved Holiday Train Show, which features model trains weaving through the Enid Haupt conservatory across replicas of city bridges and alongside nearly 200 scaled replicas of familiar sights made of plants and twigs. Those include the Statue of Liberty, the Empire State Building, One World Trade Center, Rockefeller Center, and Radio City Music Hall.

NYBG's Mosholu Entrance is directly across from Botanical Garden

Lightscape at the Brooklyn Botanic Garden

The Brooklyn Botanic Garden’s wildly popular Lightscape has returned for a second year, with some new elements in addition to the dazzling Winter Cathedral. The changing seasons are reflected over the Japanese Hill-and-Pond Garden, and you'll find “filamented discs” in tree branches that “pulse with light and color,” according to the BBG. Illuminated avian-inspired birds and paper cranes are on display as a tribute to the garden’s For the Birds exhibition.

Millions of lights welcome visitors to the Amaze Light Festival—but there are also attractions. You'll find a stage show with Amaze’s characters Zing and Sparky, as well as Zing’s Thrill Hill, where you can slide down an icy hill, and an Arctic Express Ride.

A 7-minute walk from the station

“Journey to the East” is the theme of the Winter Lantern Festival at SIUH Community Park, right by the St. George ferry terminal on Staten Island. More than one thousand oversized handmade Chinese lanterns depicting Chinese myths and legends will glow alongside an animal kingdom and a sea world (there’s an Octonauts display!), as well as illuminated tunnels and rideable illuminated swings.

Take the subway to the Staten Island Ferry at Whitehall Terminal in Manhattan.

The ferry is a 2 to 5 minute walk from subway

Illuminate the Farm at the Queens County Farm Museum

The team behind the Winter Lantern Festival has multiple locations in New York, and the Queens County Farm Museum is one of them. Handmade lanterns and other lights are stretched across the museum's historic farmland. Illuminated tunnels and rideable swings are also featured.

If you want to experience a residential holiday light extravaganza, look no further than the homes in Brooklyn's Dyker Heights. The neighborhood is famous for their over-the-top decorations. Owners have even been known to greet visitors and share seasonal cheer.

The holiday lights are all along homes in Dyker Heights on 11th Avenue to 13th Avenue and from 83rd to 86th Street.

6-minute rideshare from the 79th Street station in Brooklyn

Shimmering Solstice at Old Westbury Gardens offers an immersive holiday light experience with a soundtrack and expanded visuals. The displays are in the Walled Garden, Rose Garden, South Garden, and Allee, with a finale on the facade of the Westbury House.

Other attractions are an interactive area and a new illuminated water feature.

Suffolk County has its first light festival with the Winter Lantern Festival at the Smithtown Historical Society. Handmade lanterns in the form of flowers, farm animals, and others glow on the grounds.

About a five-minute rideshare from the Smithtown train station.

The Grand Holiday Illumination opens on December 9 and runs through January 1, 2023. Admission is free.